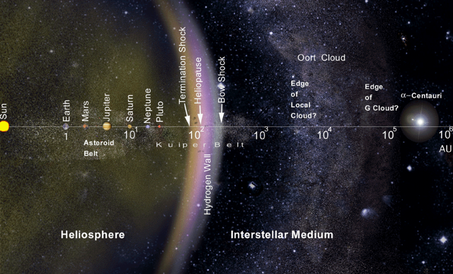 Heliosphere diagram
With out the sun Gaia wouldn't make it to far, the sun is our source of life as we know it. It grows our food and supplies us with multiple vitamins and nutrients and oh ya Oxygen too through a process called photosynthesis, but that's not what we're here to talk about. We're here to talk about capturing another dynamic of the sun called solar power. The sun is mostly made up of plasma and magnetic fields and is approx. 100 times the diameter of earth,  1,300,000 earths could fit inside the sun, it is around 11,000°F on the surface, that is a major source of  heat and energy. The milky way galaxy where the sun resides is estimated to be over 13 billion years old, it takes 250 million years for the sun to rotate around the center of the milky way galaxy one time so that's some where around 52 rotations of the galaxy so far. Of the 50 nearest stellar systems earth's sun is the 4th largest in mass and possibly the biggest if you include the heliosphere that surrounds it that is created by the solar winds thrown off from the sun. Earth sits in side this heliosphere, in fact all of our systems planets do as it reaches beyond Pluto. Earth rotates once in 24 hours, the sun rotates once in 27 days. As it rotates it makes things move inside of it and one of those things is an energy particle called a photon. Photons start in the center of the sun and take approx. 1 million years to work their way to the outside surface at which time they are hurled off of the sun and reach earth with in 8 minutes, that is a trip of more than 90 million miles. When these photons smash into the earth in their energy form they produce many different outcomes and one of those outcomes is electricity when they are captured on silicone based materials creating what is called the  photovoltaic effect (PV) which harness and stores part of the photon called an electron as energy or sends it directly to its intended purpose. Thus "SOLAR POWER" and it is abundant and it is free and it is clean. I guess you could say it's "Proper".