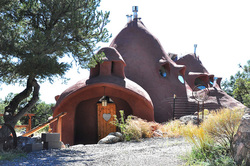 OK, so let me get this right, you go around and collect all the used tires, old plastic bottles and aluminum cans and other solid junk that you can find, and then you drag it back to your plot of land and start sticking it all together with mud while incorporating a self sustaining grey, black and white water system that will provide you with fresh water and food and sewage reclamation. Wow, that is like a spaceship, but only on earth and you don't have to find a plasma capacitor or plutonium drive system to speed you through the stars because we are kind of sorta already doing that. 290 million used tires are generated every year in the U.S. Thanks to technology and the great American entrepreneurial spirit, 230 million of them are finding new lives in other functions from everything  from fuel to ground up applications such as highway surfaces. That still leaves 60 million every year that we need to figure out what to do with. Wellah, enter the "EARTHSHIP". Other then just being friggen kool as all get up, the ecological side of these dwellings are just a win win across the board and they're not just for your crazy uncle anymore with what mother would call "alternate views from society". That's right Uncle Larry is mainstream now, well at least in some circles. It takes approximately 1000 to 1500 tires to build an earth ship. The ram packed rubber makes a thermal mass once it is all connected together creating an even barrier to help maintain a steady relationship with the atmosphere both inside and surrounding the dwelling. Always built facing south, earth-ships take advantage of passive solar energy helping to maintain warmer temps in the winter when the sun is low, usually built into the side of a hill or berm and partially covered over the roof with dirt the summers are cool do to the Geo-thermal properties at play from the berms. Earth-ships are not always built into berms or below ground level but these factors help to fully exploit the philosophies of the dwelling. Architect Michael Reynolds is the forefather of this movement, building his first earth-ship in the 70's and perfecting the processes ever since. Being more of a desert fancie the earth-ships are slowly moving to the northern hemispheres and proving to be worthy of their ideals in the winter months. 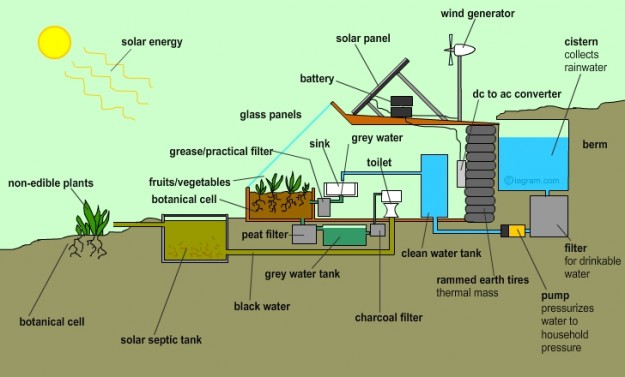