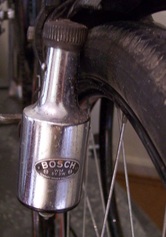 Bike Generator
Do you remember when you were a kid and you or or the older kids had a crazy little silver thing that was screwed on the side of the bike near the rear wheel, you would push it in at night and when you peddled fast enough a light on the handlebars would illuminate your way through the night. Well that little silver thing is called a generator, why is it called a generator? well because it generates electricity. When the wheel on your bike turns rubbing the side of the wheel on the generator that wheel in-return transfers the energy to a shaft that spins inside the generator turning  a conductor that creates a magnetic field creating  electromotive force, emf. This is known as . We will not go into the particulars of this here and now, all we need to know at this point is that force goes in and electricity comes out. So unless you want to hook up your exercise bike to a home generation system we need to find another source of force, here are some that are available. 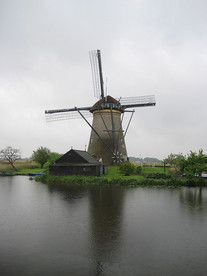 Old Wind Mill
The wind is magical and mystical, It has propelled explores around the globe on ships in search of new lands, it pushes the clouds around the planet watering our crops and filling our rivers. Science gives a definition of gases expanding and contracting causing excessive pressure distortions as the cause of winds but I don't think it's all that simple, either way the winds are here and serve a purpose gusting their way around the planet. Some region's  are more prone to high wind effects then others making them optimal for wind force generation. Wind mills or turbines is a term that is heard more and more frequently as of late as the energy crisis encroaches on a heavily populated  energy hungry planet earth. Like Solar power wind power is free, wind power is nothing new to us and we have used it in many forms for thousands of years. Holland is famous for its wind mills that provided a source of energy for every thing from running flour grinding stones to pumping water and running sawmills and powering other industrial ventures. It is only of the last century though that the wind has been harnessed to provide electricity through electromagnetic generators. Large propellers catch the force of the wind as it passes by causing the propellers to turn on an axis which then turns inside the generator conducting electricity that is then used directly to a source or stored in batteries. These wind capturing systems have been scaled down for personal use and in the right regions of the country are highly effective, after the initial cost of the system the power supplied is free. When combined with a solar system energy production can be almost  seamless. 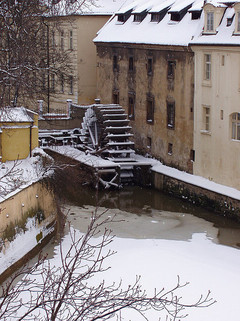 Undershot Water Wheel
Like the wind man has harnessed the power of water for many a millennia in many fashions such as moving construction materials on barges from the forests and mines down stream to their villages to damning up  river flows  for crop irrigation, since the onset of man we have tried to never be far from our sources of water. The majority of European settlements were built around strong moving rivers that provided a source of power to the inhabitants. As we colonized and materialized and mobilized and industrialized we grew more and more dependent on the movement of water. Once the water mill was developed civilization made leaps and bounds because unlike the wind you didn't have to wait for it to come, it was always there flowing away. The history of the water wheel so far dates back  to around 100 B.C. but I think it will be found out to be longer then that. The Greeks really are the ones that harnessed this form of power and perfected it to make their lives easier.  ( The Greeks sure worked hard at making their lives easier didn't they!) There are basically three type of water wheel mills, 1st. is the undershot where a wheel harnesses the flow water running underneath of it. 2nd. is the Overshot were water rolls over the top of a wheel driving it down ward. 3rd. is what is called a Breastshot that is a meeting of the first two, water hits the wheel at the middle of its circumference following the wheel underneath and out the bottom of the other side. But unless you live near a river this isn't going to help you. As of late though many micro hydro systems have come on board offering high out put with little input generally with a small elevation of as little as 15 feet over a 25 ft  area a small power plant can be  achieved if you have access to even a light flowing stream with good head flow.