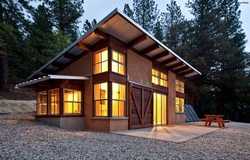 He huffed and he puffed and he blew the house down.  Well I think the big bad wolf would need his inhaler and a bottle of gatorade to try and get these walls to come down, and the little piggies would be enjoying cocktails in front of the fire without worry. Other then the stuff that we lay on the ground for bedding or cover our gardens with in the winter or drag out once a year to prop  a scarecrow up for Halloween, do we even know what straw is or where it comes from, and how many of you think that its just hay that sat around to long. What is straw? Straw is not hay. Hay is a grass that is grown for its nutritional value as feed for livestock, Straw is the shaft of cereal grains such as wheat, rice, barley, oats, rye, and others. Straw has bean mans friend since forever. Straw has a natural microbiological  breakdown that creates heat as well as insulates. Native Indians would place straw in between the layers of their tee-pees to moderate the temperatures.  Still to this day many people in many countries fill cloth sacks with straw to make mattresses for sleeping on, they are known as "palliasse", this practice was common in America as well with the early pioneers and is still practiced to this day. We have an abundance of straw on the planet and it is quickly renewable and the uses for it are growing everyday as its properties are discovered for uses in more commercial practices, i.e. Bio fuels, Biomass and the uses go on. Lately it has enjoyed a renewed life in construction, this is not a new idea but the technology to do it is. People have made shelters from straw for eons do to its heating and thermal capabilities, but it was short lived do to its quickly biodegrading capabilities. New ideas and processes have made it possible to stifle this degradation process through moisture control allowing the thermal properties of straw to be harnessed, this is achieved through the dense packing of the straw and the thick layers of earthen mud and lime plaster that encase it afterwards, as well this combination makes the property up to 3 and 5 times more resistant to fires as a regular stick built home according to some resent fire rating tests. Unlike a cob structure where the roof system is usually ( but not always) supported by the material, straw structures are first timbered in with a wood frame and a rafter system to support the roof then the walls are filled in with the straw bales, generally rebar is drove through the bales to stabilize them, then a layer of chicken wire or mesh screen is placed across them to secure the cob or plaster that will finish off the walls. Once finished the thermal and passive capabilities are anywhere from R15 to R50, that's impressive, the higher R values are being achieved with new processes in bailing specifically designed for building by super compressing the bales for more mass. Like Cob you can get fairly creative with straw bales which highly adds to it's desirability coupled with all of the other benefits of its design. A bale of straw can run anywhere from $2.00 to $5.00 depending on where you live and weather conditions, do your research on this, the more you buy at once the cheaper it will be.

Eco Fact: -It takes 10 -15 acres of harvested materials to provide the straw bails needed to build a modest home.
-Straw is one the most highly renewable resources that we have.